CNFDNT: A Story With or Without Vowels

While you’re playing Bad Bunny’s “Estamos Bien” on your phone, the guys at CNFDNT have already met the rapper, gotten their picture with him, and even given him personalized merchandise. A feat neither Javier Caso nor Viraj Kulhari ever thought would happen.

“I don’t even speak Spanish but Bad Bunny, I love him," Kulhari said. From left to right: Jorge Caso, Javier Caso, Viraj Kulhari.

Bad Bunny came to Miami in May of 2018 and left with a customized hoodie given to him at 3 a.m. in the back alley of STORY Nightclub.

“It took a lot of determination and finessing,” Caso said.

Their goal was simple: give Bad Bunny a personalized CNFDNT hoodie. They arrived at the American Airlines Arena at 4 p.m. and were brushed off by security, repeatedly being told there was no way it would happen. After his concert, they followed the rapper to STORY where Caso had a connection with a security guard who was nice enough to suggest they go stand in the alley where Bad Bunny would be arriving at.

They waited for about four hours.

Once the rapper arrived, he was kind enough to stop and take the picture, even requesting to set up professional lights and a photographer to capture the moment. Afterward, the hoodie was posted online and it sold out within the hour. Both the product and the picture went international: they had multiple shipments to South America and someone from Arizona offered to pay for the image.

“That’s the product that we worked the hardest on,” Kulhari said. “It meant a lot to us.”

Caso and Kulhari are still finishing their degrees at the University of Miami but started this business venture on April 24, 2017. Since then, they have made multiple clothing collections, met more celebrities, and continued to network with Miami greats such as Dyme Lyfe’s, DJ Williams. In turn, their class presentations and projects have improved because they have gotten real-world experience from CNFDNT.

Still being in school has its advantage: Caso has been able to take photoshop courses that have improved the designs of the products they sell. To come up with the ideas, Caso and Kulhari meet with their team of friends and family to brainstorm a product that they would proudly wear themselves. 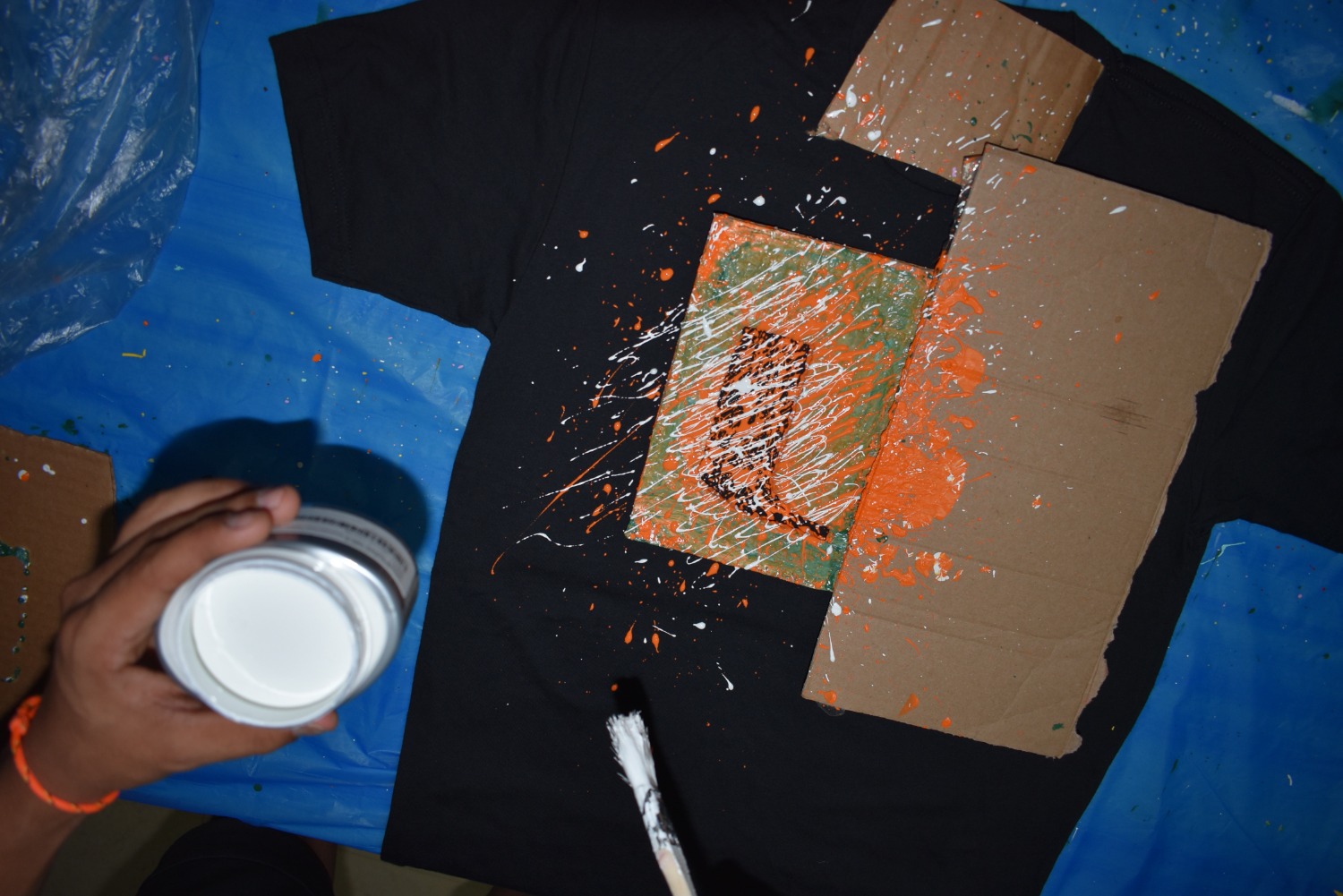 Caso and Kulhari prepare their 'cane drip' shirt the Tuesday before any Saturday University of Miami game.

"I get to incorporate parts of my life into this, like music and sports," Caso said.

They have had success whether it’s celebrity-inspired products, like the Bad Bunny hoodie, or shirts that pay homage to Miami. Their company sold 400 of their “305” shirts in about 24 hours. It took them eight hours a day for three days straight to pack the shirts and ship them out.

It’s this determination that has gotten them far in the Spanish-artist realm. They were able to get Ozuna and Chino, from Chino y Nacho, customized products. Both required a lot of talking to security guards, getting kicked out of award shows, and a trunk full of t-shirts and patience.

“We’re both good at finessing, CNFDNT just gave me a reason for it,” Caso said.

Behind the products though, is a group of guys wanting to spread positivity and enjoy this journey together.

While Caso and Kulhari might be the brains behind the operation, they still lean on others for inspiration, execution, and support.

Part of this group was Caso's older brother, Jorge, who recently passed away after a white water rafting accident in Costa Rica. This shocking and unpredictable loss was felt beyond just the families impacted.

Jorge Caso was a spirit that touched the lives of many, whether he knew it or not.

“Jorge is CNFDNT. He was involved with every step of the process. From new ideas, to sketching out designs, to motivating us and pushing us. Whenever there was an idea, we’d run it through him to see if he liked it. He is as much a part of CNFDNT’s growth as we are. He actually took time out of his day to be there for our pop up shops. He would join us to meet celebrities because we wanted to be sure to share those experiences together and make the best memories, to the point where he would play our body guard. He told the story of CNFDNT to everyone in his path because his brother’s success was his success. He never cared for money or credit, he wanted to see us rise and grow. He wanted us to reach limits we didn’t know we had ourselves.

And he still does because there is no past tense. We will continue to rise, for him. Jorge will be alongside us in every step that CNFDNT takes. He will lead us wherever we need to go because now we have a guardian angel guiding us in the right direction. If he was a hero to us all here, imagine his true powers up there. Our team just got a lot more dangerous. The CNFDNT Crew continues to be everything it once was. It hasn’t diminished, but rather grown in love, passion, and drive. CNFDNT’s next projects will directly honor Jorge. We hope you all love it, as it attempts to show everyone a taste of his energy and spirit. Every step we take from this moment forward is for Jorge, and nothing will ever change that.”

And still, they will all remain confident in their future endeavors. With or without the vowels.